WM’s years of detailed testing and optimization has enabled its System to include all Unbanked Persons and all Cash Payments in all countries worldwide into the 21st Century Digital Economy. Solves entrance issues for two of the world’s largest single market-sectors A TUV for 11 000 Kenyan Shillings – equivalent to approximately USD 100. The Kenyan Shilling is one of the Currencies for which the TUV is used by Unbanked Persons as a subsititute for cash 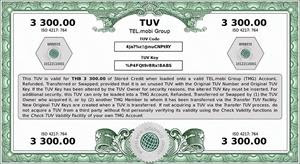 A TUV for 3 300 Thai Baht – equivalent to approximately USD 100. The Thai Baht is one of the Currencies for which the TUV is used by Migrant Workers for remitting funds home as a substitute to legacy-system transfer or remittances services

ST PETER PORT, Guernsey and NEW YORK, Oct. 12, 2021 (GLOBE NEWSWIRE) — Global Telephony Provider Webtel.mobi (“WM”) has spent years perfecting and optimizing its TUV Global Digital Currency and its Global Clearing System. Its structuring and refinements included facilitating the inclusion of all the world’s Unbanked Persons and Cash Payments into its ecosystem – as described below:

Cash
All current planning for a Global Digital Economy or a Global Cashless Society is based on flawed assumptions that the usage of Cash is declining, and the use of Digital Money is increasing. These assumptions are wrong. Cash usage is increasing globally and has been doing so, year-on-year, for the past decade. This includes the usage of Cash in Developing and Developed countries. On average, 50% of all transactions, worldwide, are carried out with Cash. No planning for “Cashless Societies” or “Digital Economies” has taken this into account because echo-chamber discussion on these matters presuppose that the entire world functions in the same manner as high-tech cities in Developed Countries – but it does not. Part of the Cash market uses Cash due to choice, and part of it uses Cash because the persons are Unbanked. Cash Payments and the use of Cash represent the largest single market-sector in the world (see the “Resources” section at the end of this article).

Unbanked Persons
Part of the market utilizing Cash are the +/- 2 Billion persons in the Unbanked Sector worldwide. This sector represents people who do not have bank accounts either because of the lack of infrastructure in countries, lack of banks in rural areas, lack of access to reach physical banks from rural areas, lack of online banking facilities, the cost of maintaining bank accounts and of transfers and payment, and the lack of KYC documentation.

Causes
The reasons for the predominance of Cash usage internationally are due to two factors, choice, and force of circumstance:

Choice (due to a variety of reasons, including):

Force of circumstance (due to a variety of reasons, including):

The largest single market-sector in the world by sector – the +/- 2 Billion Unbanked Persons in the world – are ignored, and continue to labor under adverse circumstances. Those working as Migrant Workers have to remit funds while losing large percentages of their salaries in currency conversion fees and transfer costs. Others experience the dangers of carrying or keeping Cash, and are denied access to the advantages of the 21st Century Digital Economy – being de-facto Second-Class Digital Citizens.

How WM resolved all of these issues
During its nine years of fully operational testing and refinement worldwide, WM specifically structured its Global Financial System to cater for full inclusion of the Global Cash market and Global Unbanked Sector – including in-situ studies and research in Developing countries among Unbanked communities.

Global distribution and accessibility
WM’s Online Platform is compressed, simplified, and optimized for use by all Smart Phones and Pre-Smart Mobile phones, including in high-cost internet / high-cost mobile data / slow bandwidth countries – including by the 75% of people on expensive prepaid contracts worldwide, and the 50% of Pre-Smart Mobile Phones worldwide. It is therefore deliverable, accessible by, and usable by all persons in all countries.

SCRM Machines and TUV Redemptions for Unbanked persons
For Unbanked persons to redeem TUV Digital Currency back to Cash, WM has developed its own kiosk for “Stored Credit” refund withdrawals – the “Stored Credit Refund machine” or “SCRM”. It is being rolled out in 2022. They are centrally controlled by WM, and are subject to the same security and other standards. They also have limitations on withdrawal amounts conformant with global regulatory standards. They also have mobile and battery-operated versions for remote area placement or access. WM also has a TUV Redemption Process where accredited WM VSMP Affiliates and Independent Agents can redeem TUVs for Cash – subject to stringent KYC and AML processes.

Non-interference with Money Supply, Monetary Policy or Currency Sovereignty
WM does not create or issue currency. It converts currency already issued by Central Banks into Digital Format, using the TUV as a vehicle. The funds (“Stored Credit”) remain in a regulated bank account for the life of the TUV. “Stored Credit” is not a payment, part-payment, or deposit, and remains the property of the owner (and therefore of the country of origin) until redeemed by the owner. As such, no exchange control regulations are contravened because the “Stored Credit” funds remain the property of the owner and issuing country until repatriated. In fact, if owners convert their “Stored Credit”, this has the effect of de-facto raising the issuing country’s foreign exchange reserves.

Through these tested, proven and fully operational structures and processes worldwide, WM has successfully resolved the entry of Unbanked persons and the cash economy into the 21st Century Digital Economy, and made it possible for a real and practical Global Digital Economy to exist.

The Global and Unified Digital Economy does not have to be waited for or striven for. With the WM System, it already exists.

Wikipedia – Number of Unbanked Persons in the USA:
https://en.wikipedia.org/wiki/Unbanked#The_unbanked_in_the_United_States

WSBI – Number of Unbanked Persons in the European Union:
https://www.wsbi-esbg.org/press/latest-news/Pages/Close-to-40-million-EU-citizens-outside-banking-mainstream.aspx

Research Reports on the Capacities of the WM System:
https://tinyurl.com/TUVresearch

Video on the Capacities of the WM System:
https://youtu.be/XYBrCikUhn8

Photos accompanying this announcement are available at

Photos are also available at Newscom, www.newscom.com, and via AP PhotoExpress

Cavli Wireless Showcases the Next Generation of Connected Mobility Tech at CV 2022, India