WM’s TUV Digital Currency had to cater for, and transcend, thousands of requirements to be a fully operational Global Digital Currency. Proposed CBDCs will find it difficult to do so. 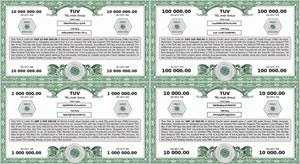 WEBTEL.MOBI DESCRIBES IMPASSABLE BARRIERS TO PROPOSED CBDC CREATION – ALREADY TRANSCENDED BY ITS TUV DIGITAL CURRENCYWM’s TUV Digital Currency had to cater for, and transcend, thousands of requirements to be a fully operational Global Digital Currency. Proposed CBDCs will find it difficult to do so.

Overview in respect of proposed CBDCs
Central Bank Digital Money already exists – and has existed for decades. The vast majority of money created by Central Banks is created in Digital format and provided to Commercial Banks and other recipients in that format (i.e., not in physical form).

Similarly, a form of Central Bank Digital Money for exchange between countries (i.e., between Central Banks utilizing different currencies) already exists in “Special Drawing Rights” or SDR instrument – curated by the International Monetary Fund. This SDR instrument is a basket of currencies – in Digital format – that can be provided to Central Banks of countries under specific circumstances. (information on SDRs appears in the ‘Resources’ section of this article).

A primary question re: CBDC creation is therefore: what are its adherents trying to create and why – because Central Bank Digital Money already exists?

Among entities currently trying to create a CBDC, there are varying definitions of what it would comprise, and there are two types of CBDC that would be created.

The first variation is a “Wholesale CBDC” – for use between Central Banks. The purpose for such an instrument has yet to be clearly and coherently articulated, because as Central Bank Digital Money already exists, has existed for decades, and performs its functions adequately, it is unclear what a replication thereof in another form would achieve. This variation of proposed CBDC will therefore not be discussed in this article.

Retail CBDCs
The second variation is a “Retail CBDC”, which would be Central Bank issued Digital Money issued to, accessible to, and usable by the public. Notwithstanding that the requirement for, or constructive purpose of, such a Retail CBDC has yet to be clearly or coherently defined, the desire to create one does not account for the extreme dangers they will create for national or international economic stability – some of which are as follow:

Disintermediation of Commercial Banks
Central Banks issue of money to the public would – as a matter of certainty – lead to partial or significant disintermediation of Commercial Banks. This means the role of Commercial Banks in creating money (credit) and acting as infrastructural pillars for the storage and distribution of money nationally and internationally would be affected – with nothing to replace it. Such an event would introduce instability into a system that – whatever its flaws may be – is the only currently globally functioning system, specifically constructed over centuries, to attend to the national and international creation of money (credit) and for national and international storage and distribution of money. To disrupt this infrastructural pillar without the means to immediately replace it, would be self-inflicted pain of the greatest order to national economies and the global economic system. As there is no infrastructure with which to replace it (other than nationalization of the Commercial Banking system), there appears to be no well-though-through purpose in doing this, or strategy to cope with the consequences of doing this. Moreover, if a hybrid of Central Banks issuing money simultaneously with Commercial banks doing so, how could Commercial banks ever compete with the Central bank that creates money and sets interest rates and other rates? They could not – and who would hear their cases against unfair competition – as the Central Bank or entities reporting to it, or reliant on it, are usually arbiters in such cases? Such a situation possesses – it seems – a great deal of potential for instability and chaos without any articulation – to date – on the advantages such a situation would bring about, and why and how this would occur.

Conflation of Personal Debt with National Debt
If central banks were to transact directly with the public (its clients), requirements for money (credit) creation would arise. This, in turn, means the Central bank would become the holders of the debt of its clients. However, how would that debt be classified in terms of National Debt? Would the population of a country then become de-facto responsible for the private debt of other citizens? How would the value of the national currency be affected if the Central Bank of a country was saddled directly with the private debt of citizens – instead of it being rather the Lender of Last Resort to Commercial Banks that customarily deal with matters of private debt? No satisfactory or coherent articulation of this quandary re: proposed Retail CBDCs has yet been articulated by its proponents.

Strategic Vulnerability of Currencies and Economies
Generally speaking, persons functioning at senior levels of knowledge and competence in the fields of Economics and Finance have a lack of expert knowledge in high-level Tech and IT matters. Similarly, people who are competent in respect of high-level Tech and IT matters have a corresponding lack of expert knowledge in Geopolitics, Economics and Finance. This leads to construct proposals being put forward that will – if followed – leave a country’s currency and economy open to Strategic Vulnerability in respect of proposed Retail CBDCs. One of these is the proposed use of “Tokens” to ensure security. However, if the Retail CBDC is to be convertible into other currencies, unless a Central Bank is to maintain extraordinary Foreign Exchange Reserves itself (and deplete them on retail or public transactions), it will be necessary for the Retail CBDC to be convertible into other currency Retail CBDCs via an intermediary organization or by other Central Banks. This will entail the absolute requirement to share details of the currency’s tokenized structure with the intermediary organization or other central banks to prevent Digital Counterfeiting. However, the very requirement to share this information to prevent Digital Counterfeiting increases the means one has to provide information that can result in Digital Counterfeiting by any bad actor. Digitally Counterfeited currency is absolutely indistinguishable from non-counterfeited Digital Currency, other than via a process that will make the retail free-flow of the currency impossible (meaning that it cannot act as a retail currency). Consequently, current efforts that focus on a “Tokenized” Retail CBDC are doomed to failure before they are even created.

Who currently has a CBDCs as they are currently defined
Currently, no country or entity has a CBDC as they are currently proposed. Although China and the Bahamas are touted as having CBDCs, this is not correct. What those two countries have are not Central Bank Digital Currencies (“CBDCs”). What they have are Central Bank Digital Payment Systems (“CBDPS”). This is why they could only test them in transactions between the public and merchant – using payment terminals. A CBDPS is not a CBDC as currently proposed or envisaged. It can only be used for payments. All that it is, is a central bank version of the exiting MasterCard, Visa, and similar Digital Payment Systems. The “Sand Dollar” of the Bahamas actually runs off MasterCard’s infrastructure – so is really only a whitelabeled version of MasterCard Digital Payments. No country has – or is likely to ever have – a CBDC as currently proposed, due to the overriding factor that no CBDC as currently envisaged can ever function without an Global Exchange Mechanism for them. A Global Exchange Mechanism does not exist and will in all likelihood – never exist.

The requirement for a Global Exchange Mechanism for CBDCs
For Retail CBDCs, as currently proposed, to function, it would be necessary for the possibility of free exchange and/or convertibility between varying currency CBDCs. To do that, one would need to have a Global Exchange Mechanism to facilitate and carry out the conversion. Notwithstanding this would require sharing of proprietary Tokenization data (which can never in fact be exchanged) with the entities running the Global Exchange Mechanism, it would also require international consensus between countries (especially Major Powers) as to where the Global Exchange Mechanism would be located. Who would manage it? according to what rules? what would the rates and prices be? etc. There is a long list of considerations. However, how would it be possible for the majority of countries – or at least the major Powers – to reach consensus? Between them – as clearly demonstrated – geopolitical Rivalries prevent any such cooperation. Whether it is the constant vetoing of one side by another in the UN Security Council, Trade Wars, threats, and agitation in respect of various parts of the world, proxy wars and the like – it is abundantly clear that geopolitical Rivalries will never disappear. Moreover, it then follows that in respect of a proposed Global Exchange Mechanism, one side will never give in to the other on decisions such as an entity’s location, management, rules, fees, costs, and other requirements. Consequently, as a Global Exchange mechanism is required to exist before CBDCs can be structured to act and function within its defined structures and processes – and as such a Global Exchange Mechanism does not exist and probably will never exist – the creation of CBDCs is rendered absolutely moot. This is because development of one will be like having a cart without a horse. Of no use to anyone at all.

Webtel.mobi’s TUV Digital Currency
When WM was creating its TUV Digital Currencies and the Global Exchange Mechanism and processes for it, the considerations listed in the preceding parts of this article were only a few of the many (thousands of) considerations required to develop a fully-functional and global digital currency, valid in and for all countries and currencies. It is necessary to attend to these many (thousands of) requirements, and the most important elements before one begins (considerations absent from the proposed CBDCs debates).
What must be addressed before the practical creation process are those relating to Geopolitics, Geostrategy, Balances of Power and the requirements for the maintenance of Global Stability. These were all addressed. WM’s TUV Digital Currency has extreme security features built into it – that are unique to each TUV. They include security features in the TUVs themselves, in their creation, transfer and redemption processes, in constant monitoring of the TUVs by the Artificial Intelligence System for multiple events. They are numerous to describe. Some of them can be seen in the “TUV Characteristics” in the Resources section of this article.

WM’s TUV provides full Global acquisition, storage, transfer, payment, Convertibility between currencies, convertibility back to a Fiat currency, return to bank accounts and various other essential requirements for a functional Global Digital Currency. None of these are theoretical, aspired-to or hoped-for characteristics. WM’s TUV Digital Currency was – after the years taken to initially create it and its Global Exchange Mechanism – fully tested and confirmed in years nine of global operations with WM’s Platform 1, prior to the creation of Platform 2 that incorporates lessons learned during the operational testing.

WM’S TUV is the world’s first and only fully functioning Digital Multicurrency in a format that produces all of the unique characteristics that it hold. These characteristics not only already also (safely) cater for the currently proposed requirements of both Wholesale CBDCs and Retail CBDCs, they supersede these requirements exponentially.

Video on the Capacities of the WM System:
https://youtu.be/XYBrCikUhn8

Research Reports on the Capacities of the WM System:
https://tinyurl.com/TUVresearch

A photo accompanying this announcement is available at https://www.globenewswire.com/NewsRoom/AttachmentNg/26651716-17ab-4684-b9f9-ca260e1bf88b

Cavli Wireless Showcases the Next Generation of Connected Mobility Tech at CV 2022, India