Sails of the Sydney Opera House Sails of the Sydney Opera House

SYDNEY, March 16, 2022 (GLOBE NEWSWIRE) — Destination New South Wales (NSW) is proud to announce its program lineup for Vivid Sydney 2022. Vivid Sydney 2022 will transform Sydney city into an illuminating fusion of creativity, innovation, and technology from Friday 27 May to Saturday 18 June, with more than 200+ events celebrating the essence of Sydney’s soul including its diversity, beauty, resilience, First Nations culture, and vibrant creative community.

Minister for Enterprise, Investment and Trade, Minister for Tourism and Sport and Minister for Western Sydney Stuart Ayres said, “The Vivid Sydney 2022 program is bursting with new events, venues, performances, and experiences, providing even more reasons to visit time and time again. This year, we are celebrating the festival’s 12th anniversary, with a bigger, brighter, and more brilliant lineup than ever before.

“Audiences will feel energised and invigorated by a number of festival firsts. This includes the longest-ever continuous Light Walk winding all the way from the Sydney Opera House to Central Station, the Vivid Sydney Dinner, Vivid Sydney Supper Club, and more, as well as all the innovative light-art installations, projections, eclectic music performances, and thought-provoking talks we all know and love.

“Vivid Sydney is an open invitation for Sydneysiders and visitors from Australia and the world to come and experience Sydney city at its creative best after dark. The 2022 festival has been two years in the making and is not to be missed,” Ayres said.

Festival Director Gill Minervini, who will deliver her first Vivid Sydney in 2022, said this year’s program captures the essence of Sydney’s soul, exploring what makes the city so unique. “Vivid Sydney tells a compelling story of creativity, innovation, and technology through light, music, and ideas that is distinguishably Sydney, yet authentically universal. The 2022 program delivers fresh and engaging content, bringing feelings of joy, excitement, wonder, inspiration, and hope to all who are innately drawn to it,” she said.

Staged over 23 nights, the festival will deliver mesmerising art displays, 3D light projections, uplifting live music performances, and deep-dive discussions from the world’s brightest minds. Plus, in a festival first, the renowned Light Walk will stretch continuously for 8km, linking the Sydney Opera House to Central Train Station, with more than 200 LED sculptural birds guiding the way as part of the Future Natives installation.

Vivid Sydney is an annual celebration of creativity, innovation, and technology, which transforms Sydney for 23 days and nights. Staged for its 12th year in 2022, Vivid Sydney fuses mesmerising art displays and 3D light projections with exhilarating live music performances and deep-dive discussions from some of the world’s brightest minds, as well as the Sydney Opera House Lighting of the Sails. Vivid Sydney is owned, managed, and produced by Destination NSW, the NSW Government’s tourism and major events agency. 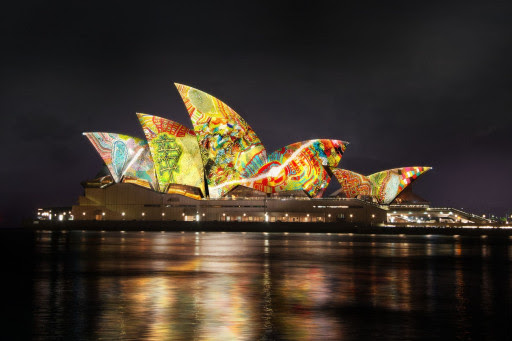