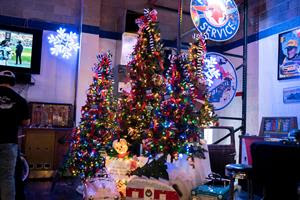 One of Many Christmas Displays at The Vault

JACKSON, Miss., Dec. 15, 2021 (GLOBE NEWSWIRE) — To coincide with his consignments in Sonicbidder.com’s “Christmas Around the World” auction, JD Pass hosted his own international Christmas celebration at The Vault. What started off as an annual event to ring in the season would go on to bring awareness to the visibility and credibility of the Jackson, Mississippi-area car scene as a whole. JD Pass, not new to the upper echelon of the collector car world, enjoyed the opportunity to bring a wide range of people into his business. There were many new faces from local car scenes and even new faces from just up the street as Deion Sanders lead the JSU to another victory and the fans needed a place to celebrate.

When asked about the experience, JD said,

“It was a beautifully weathered night, and we were pleased as punch to see old friends and make plenty of new ones. It was surprising actually because many of the new friends were not car fans. However, they left with nothing but cars on the brain which was extremely encouraging. I’m glad we were able to light that spark! We had people from surrounding states attend. Florida, Oklahoma, Missouri, Tennessee, Louisiana, and Alabama were all represented during this red carpet event. It was a night of festive cheer and holiday fun with the most amazing catering from Three Peas in a Pod! It couldn’t get any better!”

Hal Reddick of Dupont Registry decided to take a trip to The Vault to see how his longtime clients’ worked in action. What he found was a thriving car scene and a magnificent hub for it all to take place. He said of his experience:

“The Vault’s Christmas Party was absolutely amazing! JD Pass and his crew of elves dressed up the huge showroom with Holiday decorations and even Santa! All they needed was a little snow to make the showroom look like a winter wonderland…of fabulous classic cars, food, drink, and music. I enjoyed meeting the Vault Team and mingling with their loyal friends and clients. Who knew Jackson had such a cool car culture?”

From the sports fans looking to party to the Vice President of Sales for a reputable car magazine, two things become abundantly clear. One, The Vault knows how to throw a good party. Two, the collector car scene is massive. Even in cities, you’d never expect, major players are creating auto enthusiasm by observable and tangible means. The world of collector cars is everywhere and continues to grow no matter where you are.

Image 1: One of Many Christmas Displays at The Vault