You are here: Home  /  Asean  /  Press Releases  /  “Riva The Persuaders!” – The Short Film for the Brand’s 180th Anniversary is a Classy Action Movie With Favino, Beckham and Leclerc

Inspired by the famous TV series “The Persuaders!” – in Italy “Attenti a quei due” – this enthralling action film is a blend of elegance, irony and adrenaline. It can now be seen on social networks and YouTube.

A short film for the brand ‘Riva’ 180th anniversary in a classy action movie with Pierfrancesco Favino, David Beckham and Charles Leclerc

SARNICO, Italy, June 16, 2022 (GLOBE NEWSWIRE) — A highly engaging short film with three stars involved in an adventure on the road and on the waves. Co-starring Riva and Ferretti Group boats.

People who saw the world premiere at the Gran Teatro La Fenice in Venice say it’s not to be missed. But then, Pierfrancesco Favino, David Beckham and Charles Leclerc alone would be enough for it to classify as an extraordinary project.

The great news is that the short film can now be seen on YouTube and the social channels of Riva and Ferretti Group.

Inspired by the cult TV series “The Persuaders!” (in Italy “Attenti a quei due”), the film was made over the past few weeks on the coastline around the border between Italy and the Côte d’Azur.

The hugely famous protagonists are Pierfrancesco Favino, the most important Italian actor, who was also in the Riva brand’s first short film (“Riva in the Movie”), the international football star David Beckham, an icon of British style and one of the most followed celebrities in the world and Charles Leclerc, an outstanding Scuderia Ferrari team racing driver idolised by Formula 1 fans. 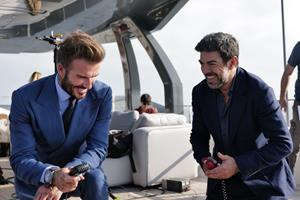 A short film for the brand ‘Riva’s’ 180th anniversary in a classy action movie with Pierfrancesco Favino, David Beckham and Charles Leclerc

“Riva’s story reads like a movie and this extraordinary short film, with its awesome trio of protagonists, is the perfect celebration of the brand’s 180th anniversary. My thanks go to Pierfrancesco, David and Charles for the friendship, the passion and fun they put into the project: the result is spectacular,” said Ferretti Group CEO Alberto Galassi. “I was a loyal viewer of the TV series “The Persuaders!” and I found the same ironic and elegant style in this little gem of a film. As always, Riva delivers big emotions.”

Together with the three celebrities, the stars of the film are the magnificent boats built by the storied Riva yard, which is celebrating its 180th anniversary this year, as well as a dazzling Ferrari and an incredible vintage Maserati.

“Riva The Persuaders!” was shot on the Côte d’Azur and in Monte Carlo, where Pierfrancesco Favino aboard a magnificent Riva 56’ Rivale races with David Beckham’s Riva 68’ Diable and Charles Leclerc aboard a Rivamare.

The action and movements are those of an adrenaline-pumping film featuring chases on both land and sea. 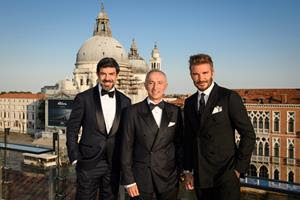 As in the case of Riva’s previous short film, the director was Federico Brugia, with production by Armando Testa Studios, in the Armando Testa Group.

Riva and Ferretti Group
Riva is a Ferretti Group brand. Thanks to Italy’s centuries-old yachting tradition, the Ferretti Group is a world leader in the design, construction and sale of luxury yachts and pleasure vessels, with a unique portfolio of prestigious and exclusive brands: Ferretti Yachts, Riva, Pershing, Itama, CRN, Custom Line and Wally. Led by Chief Executive Officer Alberto Galassi, the Ferretti Group owns and manages six shipyards located across Italy, which combine the efficiency of industrial production with typical world-class Italian craftsmanship, reaching customers in more than 70 countries across the world thanks to a direct presence in Europe, the United States of America and Asia and its network of approximately 60 carefully selected dealers. Ferretti Group motor yachts, the utmost expression of Made in Italy elegance and creative genius, have always stood out for their exceptional quality, cutting-edge technology, record safety and optimum performance in the water, as well as their exclusive design and timeless appeal.
For more information: www.riva-yacht.com

Photos accompanying this announcement are available at

The photos are also available at Newscom, www.newscom.com, and via AP PhotoExpress.