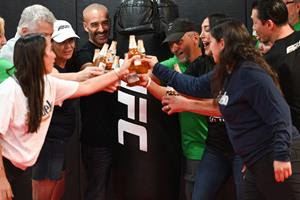 CHICAGO, June 28, 2022 (GLOBE NEWSWIRE) — As the 10th Annual UFC International Fight Week kicks off, Modelo®, the beer brewed for those with the Fighting Spirit™, and long-standing partner UFC®, today announced year two of its gym revitalization program in partnership with leading nonprofit Rebuilding Together. Modelo is on a mission to boost the Fighting Spirit across the nation by providing hard-earned renovations to local training gyms that play an integral role in strengthening their communities. Building on last year’s partnership, the trio will refurbish local gyms this year in Denver, Charlotte, Las Vegas and New Orleans.

“Modelo is excited to reignite and build upon the incredible work we accomplished rebuilding gyms in our first year with UFC and Rebuilding Together,” says Greg Gallagher, Vice President, Modelo Brand Marketing. “Access to the services provided by local gyms strengthens communities and ensures everyone can nurture their own Fighting Spirit, which is why we’re so proud to be involved in an initiative that breathes new life into those crucial spaces.”

To launch year two, Modelo brought the community-based initiative to a gym near UFC’s global headquarters in Las Vegas to observe the world’s largest celebration of combat sports, UFC International Fight Week. Modelo, Rebuilding Together and UFC provided Fight Capital Gym with a well-deserved revamp, including new jiu-jitsu mats, speed bag mounts, boxing bags and flooring, with the help of two of the biggest names in the industry. Former UFC heavyweight champion and longtime brand ambassador Stipe Miocic and UFC commentator Jon Anik lent their time and expertise to Fight Capital Gym by assisting with the renovations and providing members with a special seminar. Fight Capital Gym embodies the Fighting Spirit through its work with servicemen and women, free quarterly self-defense seminars and efforts to help members gain physical and mental empowerment through combat sports.

“After getting the chance to help a gym in my home state of Ohio last year, I am thrilled to have the opportunity to continue my involvement in this impactful program in a new, but equally meaningful, way,” says Stipe. “Las Vegas not only has a special place in my heart as the city where my career really took off but is also hugely important to UFC fans and community. Being able to give back to a community that has given me and my fellow fighters so much is such a rewarding experience.”

Following UFC International Fight Week, the initiative will go on the road with UFC fighters Justin Gaethje, Stephen Thompson and Dustin Poirier also joining Modelo, UFC and Rebuilding Together to help with renovations at local gyms in Denver, Charlotte and New Orleans. Gaethje, Thompson and Poirier are giving back to gyms in cities that have left a lasting impact on them as individuals and shaped who they are today as professional athletes.

“Working together to make a positive impact on the gyms that breed the next generation of fighters gives deeper meaning to our longstanding partnership with Modelo,” said said Paul Asencio, UFC Senior Vice President of Global Partnerships. “We’re especially excited to launch year two in Las Vegas – a city that means so much to our fans and fighters. Since the UFC wouldn’t be what it is today without the support of the Las Vegas community, it’s important for us to partner with Modelo to give back in meaningful and long-lasting ways.”

During year one, Modelo, UFC and Rebuilding Together revamped gyms in Cleveland, Austin, Seattle and Saratoga. Building upon the first round of gym revitalizations this year is another proud step for Modelo in its ongoing commitment to support the Fighting Spirit in communities across the nation.

About Modelo®
Born in 1925 in the small town of Tacuba, Mexico, Modelo has been bringing distinctive high-quality beer to people ever since, including Modelo Especial®, Modelo Negra®, and a flavorful lineup of Modelo Cheladas. Modelo Especial is a golden, full-flavored Pilsner-style Lager with a clean, crisp finish. As the #1 imported beer in the U.S., Modelo Especial recently surpassed 150MM cases sold in 2021. The Modelo family of beers are exclusively brewed, imported and marketed for the U.S. by Constellation Brands.

About UFC®
UFC® is the world’s premier mixed martial arts organization (MMA), with more than 688 million fans and 198 million social media followers. The organization produces more than 40 live events annually in some of the most prestigious arenas around the world, while broadcasting to nearly 900 million TV households across more than 170 countries. UFC’s athlete roster features the world’s best MMA athletes representing more than 75 countries. The organization’s digital offerings include UFC FIGHT PASS®, one of the world’s leading streaming services for combat sports. UFC is owned by global entertainment, sports and content company Endeavor, and is headquartered in Las Vegas, Nevada. For more information, visit UFC.com and follow UFC at Facebook.com/UFC, Twitter, Snapchat, Instagram and TikTok: @UFC.

About Rebuilding Together®
Rebuilding Together is the leading national nonprofit organization repairing the homes of people in need and revitalizing our communities. Through its national network of affiliates, Rebuilding Together works proactively and collaboratively with community leaders, long-term residents, funders and volunteers to foster dialogue and create safe, healthy communities across the country. Learn more and get involved at rebuildingtogether.org.

A photo accompanying this announcement is available at https://www.globenewswire.com/NewsRoom/AttachmentNg/973f00a2-5e65-4f03-9ef4-ad97f98e11dc