Modelo, the Official Beer Sponsor of the College Football Playoff, is celebrating fans and plays that demonstrate The Fighting Spirit 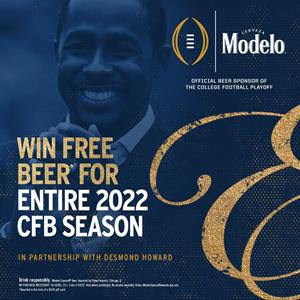 To celebrate 30 years since Howard’s 1991 punt return, Modelo is set to reward fans with free beer if a game-defining play that demonstrates the fighting spirit of college football occurs in the national championship game.

CHICAGO, Jan. 03, 2022 (GLOBE NEWSWIRE) — The final two teams are set and Modelo, the Official Beer Sponsor of the College Football Playoff (CFP), is celebrating the fighting spirt of college fans and game-changing plays by teaming up with Desmond Howard around the CFP National Championship. To celebrate 30 years since Howard’s 1991 punt return, Modelo is set to reward fans with free beer if a game-defining play that demonstrates the fighting spirit of college football occurs in the national championship game.

Should a punt be returned for a touchdown – one of the most thrilling plays in football – in the 2022 CFP National Championship on Monday, January 10, Modelo will reward 300 lucky college football fans with free beer for the entire 2022 college football season.*

As part of Modelo’s ongoing sponsorship of the College Football Playoff, fans also have the chance to win tickets to the 2023 CFP National Championship in Los Angeles. For a chance to win both prizes, fans can tweet @ModeloUSA using #CFPFightingSpiritSweepstakes and #21+, during the Promotion Period.

“When you watch a game as a fan, you live for those game-changing, or even season-changing, moments that make it all worth it, and it’s no different for the players,” Howard said. “They are putting in the work every day to get where they are today and have a chance to show their fighting spirit and compete for that CFP National Championship trophy. That is why I’m thrilled to recognize these plays and the fans that fuel this sport with Modelo.”

Earlier this season, Modelo entered a multi-year sponsorship as the Official Beer Sponsor of the College Football Playoff and gave away tickets to this year’s title game to bring fans closer to the action. Whether it’s battling for that extra yard, a game-changing interception or the last-second field goal, Modelo sees true fighting spirit in college football and its passionate fanbase.

“Modelo is excited to join the roster as an Official Beer Sponsor of the College Football Playoff because the tenacity and determination of these programs embody the Fighting Spirit mentality,” said Greg Gallagher, Vice President of Brand Marketing, Modelo. “All season we live to see plays that define the course of a game. That’s why we are partnering with, and paying tribute to, Howard and his iconic play – by giving fans the chance to celebrate their own fighting spirit well into next season.”

As the Official Beer Sponsor of the College Football Playoff, Modelo will host activations in Indianapolis for fans attending the national championship weekend festivities, including the Modelo’s Fan Bus at Playoff Fan Central at the Indiana Convention Center and three-days of concerts at Monument Circle, where fans can enjoy Modelo as well as receive custom printed Modelo gear.

NO PURCHASE NECESSARY. Open only to legal residents of the 50 U.S. and D.C., 21 or older. Starts 12:00 AM ET on 1/3/22 and ends 11:59 PM ET on 1/10/22. The Modelo Special Teams, Special Rewards Sweepstakes is sponsored by Crown Imports LLC. No alcohol awarded with prizes. Void where prohibited. For complete details, see Official Rules at ModeloSpecialRewards.dja.com.

This Sweepstakes is in no way sponsored, endorsed or administered by, or associated with Twitter. You understand that you are providing your information to the Sponsor and not to Twitter.

ABOUT MODELO®
Born in 1925 in the small town of Tacuba, Mexico, Modelo has been bringing distinctive high-quality beer to people ever since, including Modelo Especial®, Modelo Negra®, and a flavorful lineup of Modelo Cheladas. Modelo Especial is a golden, full-flavored Pilsner-style Lager with a clean, crisp finish. As the #1 imported beer in the U.S., Modelo Especial recently surpassed 150MM cases sold in 2021. The Modelo family of beers are exclusively brewed, imported and marketed for the U.S. by Constellation Brands.

A photo accompanying this announcement is available at: https://www.globenewswire.com/NewsRoom/AttachmentNg/f090a3ff-9eca-40b1-ba1f-1a2b6565d9ae