You are here: Home  /  Asean  /  Press Releases  /  Match Fixing on the Rise as Global Sports Betting Turnover Surpasses €1.45 Trillion for the First Time 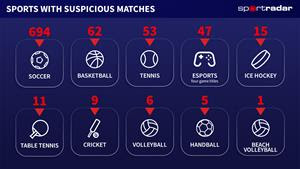 LONDON and ST. GALLEN, Switzerland , March 03, 2022 (GLOBE NEWSWIRE) — The detection of a record number of suspicious matches exposes the serious, ongoing threat match-fixing presents to the integrity of global sport at all levels as the amount of money bet on sports reached record heights in 2021. This is a key finding of a new report, ‘Betting Corruption and Match-fixing in 2021’, prepared by Sportradar Integrity Services, a global supplier of sports integrity solutions and a division of Sportradar (NASDAQ: SRAD), a leading global sports technology company.

The increase in suspicious activity arose alongside record levels of global sports betting turnover, which Sportradar now estimates at more than €1.45 trillion. According to the report, in 2021 approximately €165 million was generated in match-fixing betting profit. Organized crime syndicates are funded by revenue generated from betting fraud, which can in turn finance other illicit activities. The overall sum generated through betting corruption last year may even be greater, as this figure does not include any other potential financial schemes such as money laundering.

While the number of suspicious matches detected in 2021 reached a record high, Sportradar underscored its commitment to protecting the integrity of global sport by working with its partners to support 65 sanctions: 46 sporting sanctions, 15 criminal sanctions and four sanctions that were both sporting and criminal. These were delivered in 11 countries across football and tennis, with lifetime bans handed down to eight athletes.

Andreas Krannich, Managing Director, Sportradar Integrity Services, said: “There is no easy short-term solution to the match-fixing issue, and we’re likely to see similar numbers of suspicious matches in 2022, if not more. As the market has developed, so the threat of match fixing has evolved. Now, would-be corruptors take an increasingly direct approach to match-fixing and betting corruption, with athletes messaged directly via social-media platforms.

“We can take what we observed in 2021 and ask ourselves as fans of sport, what lessons can we learn? At Sportradar, we believe in adopting a progressive approach to integrity protection, through bet monitoring and intelligence gathering. This has been proven to deliver sanctions against those involved in match-fixing. Preventative measures, such as educating athletes and stakeholders, are also crucially important in the long-term fight against match-fixing.”

Other key findings within the report include:

Assessing the year ahead, the report forecasts a further increase in the number of suspicious matches set to be detected in 2022.

Sportradar Integrity Services’ report into match-fixing and betting corruption serves to highlight the extent of match-fixing and the damaging effect it has on the industry. The intention is to publish the report annually in order to raise awareness of the latest and most extensive data and trends.

The company used its UFDS to monitor more than 500,000 sports matches in 2021 and to provide an in-depth analysis of the match-fixing landscape. As a large representative sample size, it can be taken as a strong indication of the true rate of match-fixing globally.

Sportradar has made the UFDS available free of charge to all sports globally since October 2021 in an effort to ensure clean sport and to support all sports at all levels with their integrity measures and the system is now used by more than 120 sports organisations globally. Current partners include large international federations such as FIFA, UEFA, ITF, and ICC through to smaller organisations representing an individual sport in a single country.

ABOUT SPORTRADAR:
Sportradar is the leading global sports-technology company creating immersive experiences for sports fans and bettors. Established in 2001, the company is well-positioned at the intersection of the sports, media and betting industries, providing sports federations, news media, consumer platforms and sports-betting operators with a range of solutions to help grow their business. Sportradar employs more than 2,300 full-time employees across 19 countries around the world. It is our commitment to excellent service, quality and reliability that makes us the trusted partner of more than 1,600 customers in over 120 countries and an official partner of the NBA, NHL, MLB, NASCAR, FIFA, UEFA, ICC and ITF. We cover more than 750,000 events annually across 83 sports. With deep industry relationships, Sportradar is not just redefining the sports-fan experience; it also safeguards the sports themselves through its Integrity Services division and advocacy for an integrity-driven environment for all involved.

A photo accompanying this announcement is available at https://www.globenewswire.com/NewsRoom/AttachmentNg/47ea7711-fd52-447e-92fa-8d41e98725d2