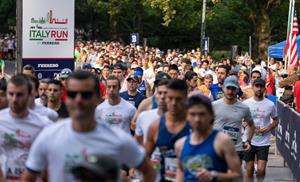 NEW YORK, July 18, 2022 (GLOBE NEWSWIRE) — After the stop imposed by the pandemic, the Italy Run, now a classic for the New York runner community, is back in Central Park. Almost 6,000 runners (and many others were excluded after the tickets sold out) took part saturday morning in the 4-mile (6.5 km) race, organized by the Consulate General of Italy, with the contribution of the New York Road Runners (NYRR) and Ferrero North America. Many other people crowded the ‘Festival’ set up for the post-race, under the banner of Italianness and Made in Italy products.

“It wasn’t easy, we wanted to organize it last year too, but it wasn’t possible. In fact, the Italian community in New York and the runners community have waited for three years. Now we’re back and it’s fantastic,” says the consul general of Italy in New York, Fabrizio Di Michele, who worked hard for the return of the Italy Run in Central Park. “It could not have been better than this. This is not just a celebration of Italy in the heart of Manhattan – continues Di Michele – it is a celebration of sport and friendship and also a great day for relations between Italy and the United States, particularly for the special relationship between Italy and New York .”

The key partner of the Italy Run are the New York Road Runners (NYRR). “This has always been one of the favorite races of our running community. We knew that if the Italy Run was back, runners would flock here to celebrate the event,” says Kerin Hempel, CEO of New York Road Runners, pleased by the thousands. of runners who took part in the race, which ran along East Drive and West Drive in Central Park. Todd Siwak, CEO of Ferrero North America, the main sponsor of the event, also celebrates the saturday’s “fantastic event”, underlining the commitment of the Nutella company for outdoor activities, “with a program that sponsors 29 events across the country, all focused on the joy of outdoor activities.”

For the record, the race was won by New Yorker Robert Napolitano – “I’m half Italian on my father’s side,” he wanted to point out – for the men and by Grace Kahura of Boulder, Colorado, for the women. Starting from this edition, the ranking for non-binary people has also been established, won by Pierce Lydon, of Glendale, New York.

“Next year we want to do it again – consul Di Michele assures – It will not be easy, because many other countries want to do the same and this year we were the only ones who have managed to organize a race in Central Park. We are probably also the only ones able to do it. To gather all these people. ” The new appointment with the Italy Run is in 2023.

A photo accompanying this announcement is available at https://www.globenewswire.com/NewsRoom/AttachmentNg/8c89d44d-f3f0-45ef-9cfe-10fbbbac8f97